I haven’t posted about this for a while, but the project is definitely progressing. The hardware is completeâ€”PCBs have been manufactured, I’ve soldered them up, and they have been fitted into enclosures. The firmware is also progressing well, though much slower than I had hoped due to being quite busy at the moment! The PCBs have had quite a few minor changes since I last posted pictures, especially on the main controller PCB. Some of the connectors were relocated and quite a few mistakes were fixed before production. Even so, as with almost any first revision PCB, there have been a few mistakes…

The first mistake is on the 32.768KHz clock line from the RTC to the AVR microcontroller. The clock output is open drain on the RTC, so this requires a pullup resistor to get a meaningful signal. The AVR I/O port has an internal pullup that can be enabled if required so I thought I could use that, but it turns out that doesn’t work if you use the port as a clock input rather than a general purpose I/O. This is easily fixed with greenwire and a 1K resistor. 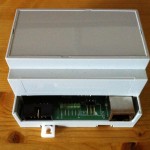 Main Board in Enclosure

Finally, it looks as though I may have wired up my Ethernet port with the wrong wiring. By this I mean the connector may have the TX and RX lines crossed so it requires a crossover cable to work. I’m not entirely certain of this, as the only non-auto-MDI/X device I have is my Snom 300 phone, which may have the wrong sort of port itself. I went over my schematic several times and can’t see a problem. Thankfully it works just fine other than this, and as most switches are auto-MDI/X these days this shouldn’t be a problem. If it is, you can just use a crossover cable instead. 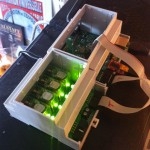 The firmware is coming along nicely. It uses the Contiki Operating System as a base, but replaces the build system and rewrites/adapts many of the bundled applications and libraries to work better for this project. Things I’ve got working so far:

Next up are the improvements to the web server to make the system configurable over the web, including networking configuration (static IPs, NTP servers, syslog, etc…) and much more. The heating control will be the next big part of the jigsaw.